Top 7 DON’TS of a Self Drive Kruger Safari

I have been going on trips to the Kruger National Park for years now and I have seen some things people do that completely beggars belief. So I thought I would make a quick list of things to not do while inside the park.

If you need a quick and easy guide on how to plan a self-drive trip to the Kruger National Park, click here.

For my favorite Youtube channel that showcases some of the things some people should not be doing in the Kruger National Park, click here.

Do NOT break the speed limits:

The speed limits in the park are as follows:

These speed limits are extremely important for you to maintain for one specific reason…animals. The park is home to several million animals and they travel freely across these roads. If you drive too fast, hitting one is very easy.

Furthermore, if you hit an elephant, you have a very good chance of not surviving the crash, or if you do, you might not survive the elephant’s retribution. You see, an elephant weighs over a ton and they are fiercely loyal to the rest of the herd. If you injure a herd member, they will not stand idly by.

I remember this one German lady who was driving along at around 80km/h on a gravel road. I stopped her and informed her that just around the bend where I had come from there was a herd of about 100 elephants with babies crossing the road. This is not a situation you want to go barreling in to at 80km/h.

Do NOT aggravate the elephants:

Speaking of elephants, do not be this guy. And you definitely DO NOT WANT be this guy (the elephant in this video was shot).

Furthermore, if an elephant injures a human being, the entire herd must be put down. Elephants are very intelligent and they are very loyal to the herd. So if only the animal who injured the human is killed, the rest of the herd will become aggressive to humans. So the entire herd will be eliminated including the babies. Do you really want to be the reason baby elephants die?

Do NOT feed the animals:

This is said in every park that you go to, but there is a very important reason for this.

Animals usually fear humans. So for the most part, humans are safe when they come face to face with a baboon or a hyena. When people start feeding these animals, they start to see humans as a food source. When such an animal approaches a human and expects to be given food and the human doesn’t feed them, they become aggressive and can seriously injure that person, if not outright kill them.

This is a big problems with both baboons and hyenas. Baboons at the picnic sites can be quite aggressive and they steal from the humans. Hyenas that prowl the fence line at the camp sites also become aggressive towards the camp employees and several attacks have been recorded in the past.

The only thing that happens when you feed these animals are that eventually they get put down. So do not feed the animals, you are just putting other people in danger as well as the animal.

Do NOT leave food in your tents:

For any experienced camper, this is a no-brainer. While you are on drive, baboons and monkeys find their way into your tent and raid all your food.

Also in some other parks in Africa where there are no fences, other animals also come into your tent and you are usually left with no food and one hell of a mess to clean up.

Do NOT exit your vehicle while outside the camp except in designated areas:

It is strange that people do this. I have seen it on more than one occasion and it is so dangerous. My favorite incident was while I was driving next to the Timbavati River about two years ago.

I came upon a tourist who was standing about 3 meters away from a crocodile sunbathing on the banks. The man was about 5 meters from his car.

Crocodiles are one of the few predators in the world who still regularly feed on people. With a bite force around 3700 pounds per square inch, if it gets a hold on you, you will not get away. Furthermore, they move very fast on land. This was truly a stupid thing for this tourist to do…he could have been killed.

Another good example you can see here. The people in these cars practically get out of them to see a sleeping male lion. The Lion can cover that ground way faster than those people can get back into their cars.

Another one is this woman who got our of her car to view a leopard. NOT smart.

The animals in the park have over the years become accustomed to vehicles and they generally do not see them as a threat. Humans on the other hand is a threat and when you get out of your vehicle the animals will react based on their fight or flight instinct.

The Kruger National Park is one of the largest animal sanctuaries in the world. Larger than some countries, it is a place where the animals can live inside their natural habitat mostly undisturbed. It is a paradise for those who love nature.

However, you always see bottles lying around, toilet paper and various other things. These items can become serious problems for the animals as they pose choking hazards, may contain harmful chemicals and let’s face it, is ugly to see.

Now the park employs various people to pick up this litter and they do a very good job, but it is still harmful to the animals and the natural world they inhabit.

Remember, you are a guest in the animal’s homes…respect that. Also, if you get caught you stand the risk of a hefty penalty and expulsion from the park.

Do NOT hog sightings:

Sometimes a good sighting can become swamped with cars. I have seen up to 20 vehicles at a lion sighting, with several people trying to see.

In such a situation, tempers flare as people can’t see and I once saw a guy get out of his vehicle because he wanted to get physical with another driver. Luckily for him, the lions were upset by the commotion and moved into the bush. If he had been unlucky he would have been badly injured or even killed.

Usually, what I do at a busy sighting is I take my photos, maybe view for a minute or two and then move on to give someone else a chance. This reduces the stress caused on the humans and also the animals.

When you are in the park, be sure to obey the rules. They are there for your safety as well as the safety of the animals. Remember, you are a visitor to the home of the animals and you should respect that. 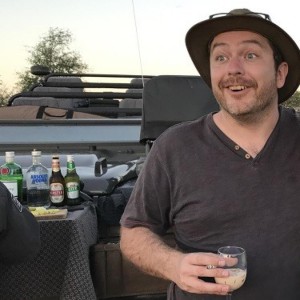 © 2017 Safari With Pieter is proudly powered by Smiles Travels.